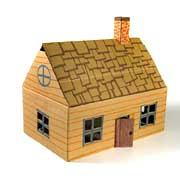 We live in Boxes!
I wake up in my bed -box
entombed in duvet
In my bedroom -box
And head for kitchen -box
I eat cereal
poured from cereal box
or eggs fried in a pan
taken from an egg box
laid by hen
in pen -box
put in egg box
to lorry -box
to supermarket big box
to trolley box
to car boot box
to fridge box
to fry boil poach scramble
to my stomach box,
which all ends in the end in bog box!
So we're off in the car box
train box
to work box
boxed in by our lifestyle workstyle
boss box
take pills for stress box
and drink coffee to keep us awake
from the coffee jar in mug box box
file our work in file box
in / out box
back on car/train box
to home box
and shattered sit on front of
THE box.

Shabbr Shabir made hijra to Dubai some years ago and with his wife has set up an educational institue there called "edutiliy."
He writes.....

Where do I start?

The evolution of the current factory style schooling system?
How did the early Muslims study or educate their kids?
The brain-dead memorizing of the Muslim countries school systems of today?
What do we want to teach our kids?
How the transfer of knowledge from the Muslims to Europe took place in the 12th and 13th century?

“I've come to believe that genius is an exceedingly common human quality, probably natural to most of us. I didn't want to accept that notion--far from it--my own training in two elite universities taught me that intelligence and talent distributed themselves economically over a bell curve and that human destiny, because of those mathematical, seemingly irrefutable, scientific facts, was as rigorously determined as John Calvin contended. The trouble was that the unlikeliest kids kept demonstrating to me at random moments so many of the hallmarks of human excellence--insight, wisdom, justice, resourcefulness, courage, originality--that I became confused. They didn't do this often enough to make my teaching easy, but they did it often enough that I began to wonder, reluctantly, whether it was possible that being in school itself was what was dumbing them down. Was it possible I had been hired not to enlarge children's power, but to diminish it? That seemed crazy on the face of it, but slowly I began to realize that the bells and the confinement, the crazy sequences, the age-segregation, the lack of privacy, the constant surveillance, and all the rest of the national curriculum of schooling were designed exactly as if someone had set out to prevent children from learning how to think and act, to coax them into addiction and dependent behavior.

Bit by bit I began to devise guerrilla exercises to allow the kids I taught--as many as I was able--the raw material people have always used to educate themselves: privacy, choice, freedom from surveillance, and as broad a range of situations and human associations as my limited power and resources could manage. In simpler terms, I tried to maneuver them into positions where they would have a chance to be their own teachers and to make themselves the major text of their own education.”

John Taylor Gatto was voted New York State teacher of the year in 1991. He worked for 26 years as a New York City school teacher. The above is from his book Dumbing Us Down:The Hidden Curriculum of Compulsory Schooling.

Lets look at it from another angle, Industrial Revolution, factories poping up every where, people moving from the countryside to new towns, now where do the kids go? And what about the future factory workers, so here come the schools, just like the factories, in at age 5 and ready to work in the factory at age 9 to 10, until 1930’s when the age was changed to 13 or 14. The current schooling system is just an extension of this and how to prepare the sheep for the green pastures.

Sending kids to a good Christian school is a good point, as most good Christian based schools have similar conservative moral values as Muslim schools and are generally better run and organized, and of course  most Christians don’t believe in their own belief system so there would be very little chance of Muslim kids getting influenced by their beliefs.

“It is worth making clear from the outset that Patrick Henry College in rural Virginia is not your average American university. At Patrick Henry, the students - about 75 per cent of whom have been taught at home rather than in schools - are required to sign a statement of faith before they arrive, confirming (among other things) that they have a literal belief in the teachings of the Bible. At Patrick Henry, students must obey a curfew. They must wear their hair neatly and dress "modestly".”


We are using and have used some US home schooling systems, they are well organized, lesson plans, down to day by day, reading books, projects, online resources, all a parent has to do is follow the instructions and spend no more than 2 hours a day, which means you are able to give your child the more important education of Quran, Arabic, etc, because they have time.


The best thing is when you get to subjects like Greek methodology, or Christian beliefs, you can deal with them from an Islamic perspective, and of course your child sends tests back to the US and they accredit the grades just as if he was attending a regular school.


“Students must also obey a rule stating that if they wish to hold hands with a member of the opposite sex, they must do so while walking: standing while holding hands is not permitted. And at Patrick Henry, students must sign an honor pledge that bans them from drinking alcohol unless under parental supervision.
Yet these things alone do not make the college special. There are, after all, a number of Christian establishments across the United States that enforce such a strict fundamentalist code for their students.
No, what makes Patrick Henry unique is the increasingly close - critics say alarmingly close - links this recently established, right-wing Christian college has with the Bush administration and the Republican establishment as a whole. This spring, of the almost 100 interns working in the White House, seven are from Patrick Henry. Another intern works for the Bush-Cheney re-election campaign, while another works for President George Bush's senior political adviser, Karl Rove. Yet another works for the Coalition Provisional Authority in Baghdad. Over the past four years, 22 conservative members of Congress have employed one or more Patrick Henry interns. Janet Ashcroft, the wife of Bush's Bible-thumping Attorney General, is one of the college's trustees.
And this is no coincidence. Rather, it is the very point. Students at Patrick Henry are on a mission to change the world: indeed, to lead the world. When, after four years or so of study, they leave their neatly-kept campus with its close-mown lawns, they do so with a drive and commitment to reshape their new environments according to the fundamentalist, right-wing vision of their college.”

Now home schooling is just the beginning, in essence there is a unique opportunity as mentioned by Abu Zakariya, a new method of learning, using technology, blended learning systems and new pedagogy.
Smaller institutions rather than large schools that specialize in subjects like languages (Arabic/ English), Quran, sciences (math’s, physics), sports, character development and arts, so these intuitions become specialized and experts in their areas which would be based close together, this is something that can be achieved in the UAE because education is private business here, and people will pay for good education, the better your institute the more money you can make, which in turn should attract better qualified people. Already there are specialists institution in languages, math’s and sports but for after school programs.

Why in today’s world when children spend 6 to 7 hours at school, should they have to get extra tuition or go to institutions, this alone is a question mark on the schooling system.

One thing that I feel is clear and the case is closed, the current schooling system developed, designed and implemented is not the best for our children, and our children have a right over us to educate them, and we will be asked about it.

We currently have a education institute in Ajman and have developed a program from research in the US, the program is for 3 to 5 year olds, and helps them develop their language skills in both Arabic and English, because the accent picked up by a 4 year old will stay with them for the rest of their lives. as well as Quran and manners;

Its a start, make du’aa.

May Allah(swt) help us learn the truth, understand the truth and implement the truth.

All the information is out there, I suppose it’s a matter of someone clearly researching this from Muslims perspective and writing a book, or developing a website about the history of education and how to educate Muslim children.

If you are wondering why there hasn't been a post for a while that's because the discussion on the comments section has simply been too absorbing!
Please take time to keep up with the comments, and send in your opinions. They are moderated by myself, so they won't appear on the blog until I have had time time read, edit if necessary and comment if I feel the need.
Over the last week there has been an on going discussion about the respective merits of the Muslim and non-Muslim lands and hijra, see under Passport Control. Well done to Abu Mayriam for getting me thoroughly annoyed, starting the discussion and braving my scathing pen. One of the most worth while things about blogging is the ideas and discussion that articles and comments on articles can generate and having your ideas subjected to critical analysis and appraisal.
Otherwise I am also super busy here in the ICC and also in various I.socs in London who all seem to have the idea of having Islamic week during the same week.
Now let me see....many universities, very limited speakers all being asked to lecture over the same time period...hmmmm, you wonder what they actually learn at these Universities anyhow!
If you are interested in attending any of my lectures you can find out where and when I'm supposed to be on my Google dairy. On the right, scroll down -------->
My audio/visual web site is back up thanks to Allah first and the genius and hard work of Shabbaz Malik. You can find it at www.islamsgreen.com If you find it useful please donate. All proceeds go to help maintain and improve the site.