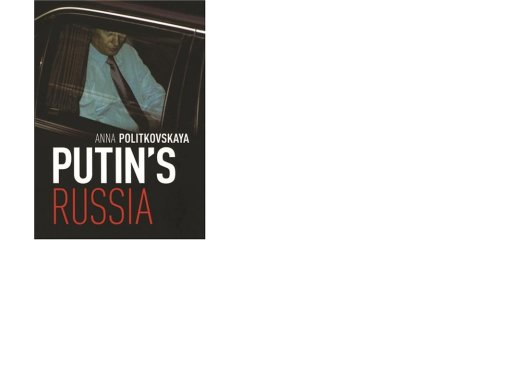 Just in case you've forgotten about the brutal murder of our brother Alexander Litvinienco here is book that should help bring it all back into focus. Only its author, Anna Politizkavaya was also murdered, as by the way have a about twenty journalists all of them outspoken critics of Putin and the corruption of the ex-KGB and gangster run former Soviet Union. Anna stood out in particular for her expose of the bloody genocide in Chechnya. This mother of two was gunned down outside her apartment. There are plenty of contenders for her would be assasins. If you want to know who or why read this book!

Putins Russia is a grim portrayal of an increasingly desperate nation. A nation with all of the faults of its communist precursor, and then add some, and none of its virtues.  Putin's Russia has not been published in Russia. It's banned.

Anna's style is very human. There is nothing remote or academic about this book, because it deals with real people and their mostly brutal lives. Each chapter is a little cameo of some part of the struggle for existence in the Russian Federation where laws, it seems, mean nothing. Judges are in the pay of organized crime whose bribes grease the wheels of the beaurocrats. It's a nation that oozes corruption and brutality.

In chapter One, "My County's Army, and It's Mothers" Anna details the terrible and brutal lives of the  Russian Federation's conscript Army, a law completely unto itself, who officers steal from, beat, humiliate, use as slave labour and even kill its soldiers with virtually no accountability. It's as if to say "If this is how the Russian Federation treats its own, how will it treat others!

In Chapter Two gives us a glimpse of exactly that as she open the can of worms of war crimes and terrible abuses suffered by the Chechen peoples at the hands of Russia's army, and where she details the sick and brutal rape and murder of a Chechen girl Elza Kungaeva by a Russian tank commander Colonel Budanov and the farcical trial that follows.

Chapter Three and Five describes how much life had changed for some after the collapse of the Soviet Union.

Chapter Four "How to Misappropriate Property with the Connivance of the Government" gives an insight into exactly how thoroughly corrupt Russian society has become. The scenes described in the chapter are so fantastic it might be taken out a movie! It is clear that what is going in Russia on bears little semblance to anything that could be called civil society. We are introduced to the turf wars of organized crime as two gangs battle it out for control of a factory, each supported by a different part of the state apparatus which is under the pay of each consecutive gang. She details the rise of Pashka Fedulev, from small time bootlegger to big time industrialist and "entrepreneur", and his side kick policeman Nikolai Ovchinnikov who rises along side him to the exulted position of Deputy Minister of Internal Affairs and Head of the Central Agency for Combating Organized Crime, a position to which he was appointed by Putin himself!

In Chapter six where Anna details the siege and horrific gassing of the hostages Dubrovka theatre in  Moscow. 200 of the 800 hostages are killed. Not by the Chechen hostage-takers, but in fact by the gas used by the Russian Special Forces. As gas picked by Putin himself!  Not to mention the on the spot execution of the hostage takers.

In the last Chapter Anna tires to answer a question:
"Why do I so dislike Putin?"
"....this precisely why. I dislike him for a matter-of-factness worse that felony, for his cynicism, for his racism, for his lies, for the gas he used in the Nord-Ost siege, for the massacre of the innocents (she is referring to Chechnya) which went on throughout his first term as President.
This is how I see it. Others have different views. The killing of children has not put people off trying to have Putin's period in office extended to ten years. This is being done creating new pro-Putin youth movements...
In Russia we have had leaders like with this outlook before. It lead to tragedy, to bloodshed on a huge scale, to civil wars. I want no more of that. That is why I so dislike this typical Soviet Chekist as he struts down the red carpet in the Kremlin on his way to throne of Russia."

The man's a complete dictator and the fear he has instilled with his totalitarianism into the populace hearkens back to the days of Stalin. I wonder what Khodorkovsky's future holds for him?

ARGcomment: Khordorkovsky, it seems was really imprisoned for daring to hold political ambitions that didn't include slavish obedience to Putin's dictatorship. He along with a virtual "opposition in exile" mostly based here in UK (Boris Berezovksky, who Litvinenko was ordered to asassinate) have been hounded by Putin.
The most we get from those so desperate to spread democracy in the Middle East concerting this tyranny in Russia, is an occasional expression of "concern", but more often smiles, deals, handshakes, and of course our PM's declaration of being Putin's "personal friend."

Mashallah amazing article. The hidden truth of Russia's oppression unvieled by a woman who was killed for her actions. I have to buy that book inshallah!

The sad thing is that this will not be published on the newz or newspapers because truth and justice will allways be venom to those who feed the massess of the public with lies, slanders and prejudice.

"Oh you who believe, stand out firmly for Allah as just witnessess; and let not the enmity and hatred of others make you avoid justice. Be just: that is nearer to piety." Al-Quran Chapter 5 Verse 8