Dialogue works when you know its language 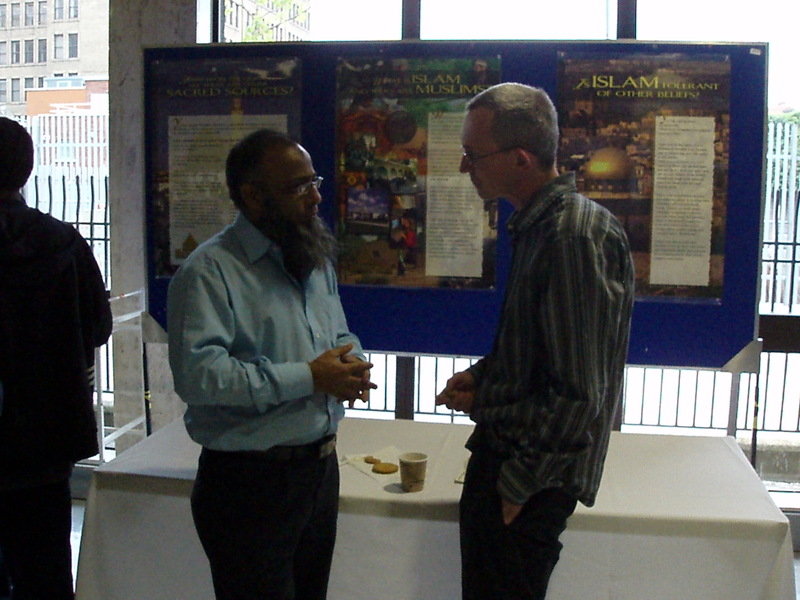 A couple of weeks ago I was involved in three dialogues. Two were very positive with Catholic priests and one pretty awful with an Evangelical. For my dialogues with the priests I was in their home territory, Eire. One in Dublin with Patric Raliegh, sadly poorly attended, and in Cork with Shaun O'Sullivan which had one of largest audiences of non-Muslims that I have spoken to in ages! The topic was "the purpose of life". The experience was immensely positive, especially in Cork, and the similarity between what I and the priest said was I have to admit, touching.  Now when I was invited I was very clear that I did not want to get involved in any debates as such, but more of discussion about our respective faiths and issues surrounding them. In other words what I seek for myself and others is understanding. To understand why and how someone believes what they do and for others to understand that about myself.
It is strange that I find myself here, because although I have never been an great advocate of debate, because it seems that it achieves nothing significant in the way of Dawa, I have never been a great supported of inter-faith dialogue either, partly due to same reason, but also there is something implicit in interfaith dialogue that seems not to fit well with our firm conviction that we are upon the truth and all else is falsehood, or at least that we agree not to take that stance during the actual dialogue. After ten years of Speakers Corner that didn't sit well with me. No, my comfort zone has always been getting people to listen to what I have to say about any given issue. If people want to find out what Chrisitans or athiests or whatever have to say...well go and listen to them! There has been always a constant stream of requests for me to de debates. People it seems are not interested in talks, they like debates. One thing is for sure, they get the people in. Bums on seats as the saying goes. And why?
Debates are like boxing matches. People love them because they love a good fight. That's what interests them. OK, so you get people coming, but what is the result? Supporters of each position by and large come to see the other side get battered. That fact that the debate ends in the defeat of one or another opponent does very little to change anyone's mind.  Mostly the great Muslim debaters of our age come off best, but not always.
The only major debate that I did was against the Christian missionary Joseph Smith on the issue of the sources of Islam, and that was because Smith had so completely out debated Jamal Badawi in Cambrige that I had break my principles and respond. That fact that Smith had out debated Badawi did nothing to change any Muslims view point on the issues at hand, even though he convincingly won, but he won becasue of his clever techniques and Badawi's complete unpreparedness for his arguements, not becaue of any facts. So what was achieved? At best, debates can make Muslims feel good about being Muslims and that our religion is better. Perhaps, in an ideal situation, it might even cause some of the other side to be won over. This might happen if the debate is more a serious achademic discourse rather than a polemic, but then do we really have a debate? Don't we have now a dialogue? It's the difference between talking at each other and talking to each other. So this is why I agreed to a dialogue of understaning, and in the case of the priest in Eire, that's what we got. No one shied away from expressing their convictions in their own faith, yet neither did we insult the other. We highlighted both where we agreed (which was alot) and where and how and why we differed.
Perhaps most important of all, however, was that the Christians who came (including the Bishop of Cork) left with an altogether different and positive image of Islam, and in these days maybe that's the best dawa we can give! Things were helped in Eire by the fact that Fr Patric had spend years as a missionary in the Punjab, and Fr Shaun had as part of his studies attended a course on different religious traditions, part of which was having to attend the services of the various faiths. Both were well versed in the language of dialougue, which made everything easier.

I couldn't say the same about Kofi, the Evangelical, with whom I covered the topic of Who is Jesus. (You can see it on Youtube here.) Perhaps the problem here was the topic, but when it came to the question and answer session I was biting my tongue as Kofi came out with stuff that seems to have been taken out from some Evangelical Manual! I have to say that I was biting at the bit, and doing everything I could to restrain myself from launching into full on speakers corner mode! How do you deal with someone who is so completely unaware of facts! What common ground is there to work together with someone who's response to the question of how do we solve the world's problems is "Jesus is coming!"
The irony was that I saw something of my old self in Kofi, and other, for want of better word "Fundamentalists". These three dialogues made me realise something very vital. There are certain people with whom dialogue is neigh impossible, becasue they don't know the language of dialogue. They can't talk beyond their simplistic formuli.
Just as Kofi declared his faith in the second coming we hear Muslims declare "Isalm/Khilafa is the solution." How fustrating! The irony is, Jesus is coming, but not how and for what Kofi expects. Perhaps the same is true for the sloganeers of Isalm. Yes Islam is the solution, but almost definately not how and for what some of those who call for it expect!

We desperately need more dialogue and less debate, more understanding and less ignorance, more reconcilitation and less conflict. We will always have differences, alhamdulillah, but it's how we deal with them that really matters.