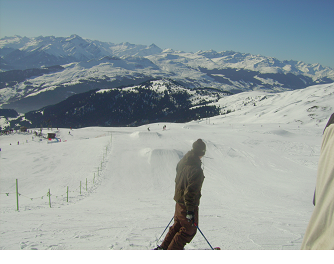 What's that all about? Don't you mean Films and lax? Green misspelling again. As for the crap bit, well I've said it before and I'll say it again, but actually I don't mean crap as in poo. No siree. Crap in this case is German for peak, as in the peak of the mountain. Laax/Flims is the name of a ski resort in Switzerland The views from the top are simply some of the most stunning I have ever seen in the Alps. There are couple of mountains that look like some lopsided snow covered Toblerones. Snotribe, well that's the name of a freestyle ski tour group who we decided to let take control of our skiing and churn us out as top notch experts.

Why am I writing about this? Well in part to big Snotribe up. If you want to go skiing I really recommend going with these guys. Not only is the package superb value for money, the guys who run it are really top guys. They love the sport. and I mean love it with dedication, and that comes through with everything they do. They are also superchilled. Now I know this may sound corny, and I've no idea how they did it, but they actually said my name with like no problems! It sort of crossed my mind that they might of rehearsed it!  Anyway, the competence of these guys in pronouncing my name was not a snitch on the competence that these guys displayed on the slopes, or more specifically "the park." Now these guys can ski and board the whole mountain, but freestyle is their speciality. 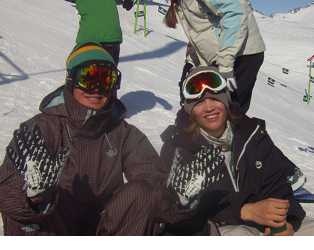 Now perhaps a little explanation is in order here for the uninitiated, as I was somewhat before this trip. Well, not entirely uninitiated to tell the truth. In fact I have visited "parks" before, but in truth my "sessions" were pretty feeble.

A "park" is a place on the mountain where you find various features that freestylers pull tricks off, like rails (as in staircase rails) that skiers and boarders slide down. It takes awesome balance and skill. Two of the kids in our group cracked their wrists on the beginner's version of it, a small table top, yes as in the top of table, which you also slide down, sideways, or even backwards. Then there are the jumps, which range from a few feet to 30 plus. Then there is the half pipe. At least I can say after a couple of weeks with freestyle school under the expert tuition of Andy Bennett I feel much more at ease in the park. I pulled a few 180's, even though it needs some refinement, and managed a basic pop and turn on the half pipe. Actually, we should say Uber pipe, because the Laxx/Flims pipe is massive. Scary big, and all 110kg of me took a tumble from the top. Not nice. Anyway readers will probably be thinking "serves you right, act your age not your shoe size, bla de bla!" It's about right really, since that average age of your top pro freestyler is 16. Anyway, Andy Bennett is formerly UK's top freestyler. He used to be 15 in the world and it the best freestyler the UK has ever produced. He now coaches the UK freestyle team, a few of whom we saw pulling tricks on the pipe, to which he would throw some advice every now and then. The UK freestyle scene all started in Sheffield, which is not surprising since its one of the few, or maybe only dry slope half pipe in the UK.

Me and me mate Imran had some adrenalin pumping race on the four-cross track, which he's been begging me to blog, mostly because he won, through sheer guts and glory and practically pulling me out of the way, which was not intentional, but rather because he was so out of control he was trying to hold on to me to keep balance. Not amusing at speed over all sorts of mad jumps and bumps! Anyway, I let him lead all the way because I knew I could take him on the chicanes, and did within sight of the finish line, but Imran was having none of it and in a act of madness and desperation flew over the last triple bumps to victory. I must add that he refused a rematch!

Anyway, I don't want to get all anthropological, but it was just cool to be involved (however commercially) with a whole culture, and watching ski movies takes on a different dimension of appreciation when you begin to realise just how hard it is to pull even basic versions of the stunts and tricks that these guys seem to pull so effortlessly.

The kids also had an amazing time, which is the main thing, but alhamdulillah, I'm still ahead of the game with them. Just! 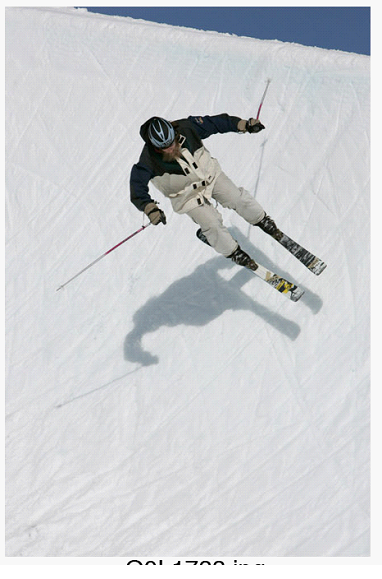 Figure 3 me in the pipe