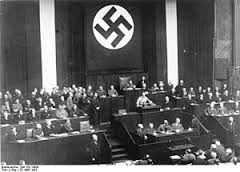 On this day in March 23 1933 the The Enabling Act was passed that gave Hitler dictatorial powers.

Its proponents are still being elected.

News papers (or propaganda papers) still feed its evil narrative and politicians rise to been seen on it's poisoned platform. Headlines today about Jews in Germany are the same word for word as those during the Nazi rise to power except for one word: Take out "Jew "and replace with "Muslim." The Daily Mail which supported the fascists here before the war spews bile now about Islam and Muslims.

Take some time to remind yourself that within Europeans there exists a vicious, racist, supremacist, xenophobic undercurrent and read about Hitler's rise to power! The idea of multiculturalism is something that modern Europeans are historically new to, and you can see from Cameron's misguided and ill informed "multiculturalism is dead" speech (ironically delivered in Germany) in Feb 2011, where he expounds the academically discredited theory on "non-violent Islamic extremism" being a path to terrorism, and how these non-violent Muslim extremists (read please "ordinary practicing Muslims") will be sidelined. We have seen how the goal posts have moved from then until now where there is talk of ASBOS for "radical" (whatever that is...make it up as you go along) preachers and passport confiscation and even making people stateless!

Forgive me for thinking that this is looking increasingly like a fascist state rather than a democratic one! There is some real irony in this since one of the factors that the government uses to identify one as a radical, non-violent extremist is rejection of democracy. Although I am tempted to dive deeper into the question of what actually democracy exactly is I won't, at least not here! Suffice to say that this government seems to have distinctly fewer democratic principles than quite a few radical nonviolent extremist Muslims. Where this conveyor belt to extremism theory ironically does seem to have some milage, is not so much when it comes to Islam and Muslims, but rather when it comes to the right wing and the Conservative Party.

Multiculturalism and living together with mutual respect and tolerance doesn't come that easily to most Europeans. They had a pretty hard time accepting that anyone might have a different interpretation of Christianity even from amongst themselves and were happily slaughtering each other for hundreds of years over theological differences that makes the Shia / Sunni divide look like a mild altercation. Jews have been horrifically persecuted throughout European history, the Holocaust only being the most extreme manfiestation of it, and let's not forget the Crusades! So perhaps we should not expect too much as Muslims living in the midst of these rather multiculturally awkward people. We Muslims have been gifted with the blessing of divine guidance that has bequeathed us a shinning example of religious tolerance from which shone forth over a thousand years of real civilization where not only did Jews, Christians, Zoroastrians, Hindus and many others live peaceably together, but other religions even had their own legal systems to judge by! Put that in your muscular liberal watch out for creeping shariah pipe and smoke it!

To be fair European history has had few historical successes. The Roman Empire was pretty multicultural and relatively tolerant, but expected offerings to be made to the Roman gods, including of course the Emperor. Jews and Christians wouldn't, so massacres and persecutions followed.  Another success story, and perhaps one of the greatests of course was under the Muslims in Spain, the convivencia in Sicily under the Normans another, and the Austro-Hungarian empire, both of which I suspect took their lead from the shining example of the Muslim world.

Living together with our differences takes a patience and intelligence sadly lacking among many of our (I use this word hesitantly) leaders today, who would rather pander to the worst in human nature than cultivate the best in it.

Today is international women's day...if you didn't already know.
While we constantly hear that women in Islam are oppressed shocking statistics are emerging in respect to the abuse of women in the west.
It seems that according to a recent survey violence against women is "an extensive human rights abuse" across Europe with one in three women reporting some form of physical or sexual abuse since the age of 15 and 8% suffering abuse in the last 12 months. Abuses against women are also among the most under reported crimes, so the real numbers are probably much higher.

You can read more in this Guardian article on the subject:

Another shocking statistic to emerge is what is be dubbed gendercide. The socking imbalance in baby girls being born especially in some third world countries where a simple and relatively cheap scan can allow families who want a boy to have a female child aborted.

It seem South Korean has managed to reverse the trend by improving womens education and position in society to make having only boys look rather old fashioned.

The Economist has an excellent article on this topic:

The Prophet Mohammed had to deal with a very similar dire situation, and an even more brutal one, in pagan Arabia, where it was a widely practiced custom to take one's daughter into the dessert and bury her alive!

This was mostly out of fear of poverty, and women seem to be the least useful members of society where much depended on  a tribes ability to muster men to fight. There was also the fear of women being taken as captives of war and the dishonour associated with that.

The Quran mentions the common attitude to the birth of a female:

"And when one of them is informed of [the birth of] a female, his face becomes dark, and he suppresses grief. He hides himself from the people because of the ill of which he has been informed. Should he keep it in humiliation or bury it in the ground? Unquestionably, evil is what they decide."

The way that Prophet Mohammed dealt with this injustice was all tied to a comprehensive and far reaching change in the way people think about life, it's purpose and goals.

The reality that what one does, everything that one does, will be accounted for.  God is the one who provides for all, and life in the end is a test: Will one believe and be good, or take a path of ease and disobedience? Women were firmly placed on the same footing as men, with equitable rights under the law and both equally responsible as spiritual beings to worship God, to seek knowledge and participate in the running of the community. Some of the greatest and most respected figures among the early Muslims where women. Respect and honour of one's mother was made one of the greatest duties of a believer, and kind treatment of one's wife a sign of true piety. Those who raised daughters in Islam where promised a special honour of closeness to the Prophet Mohammed himself on the day of judgment, protection from its horrors and entry to paradise:

It was narrated from Abu Sa’eed al-Khudri that the Messenger of Allah (peace and blessings of Allah be upon him) said: “Whoever has three daughters or three sisters, or two daughters or two sisters, and takes good care of them and fears Allah with regard to them, will enter Paradise.”*

The Prophet (peace and blessings of Allaah be upon him) said: “Whoever takes care of two girls until they reach adulthood, he and I will come like this on the Day of Resurrection,” and he held his fingers together.

Ibn Maajah (3669) narrated that ‘Uqbah ibn ‘Aamir (may Allaah be pleased with him) said: I heard the Messenger of Allaah (peace and blessings of Allaah be upon him) say: “Whoever has three daughters and is patient towards them, and feeds them, gives them to drink and clothes them from his riches, they will be a shield for him from the Fire on the Day of Resurrection.”

Classed as saheeh by al-Albaani in Saheeh Ibn Maajah

Sadly in the Muslim world today there is a return to the ways of ignorance. The noble teachings of the Prophet and the guidance of Allah has been abandoned, or perhaps never even practiced by some in the first place. Some look for solutions in the western modle of feminism, but as the statistics above seem to show, the modle has not really succeeded at all. In fact we find increased sexualisation and exploitation of women, and as the survey which I linked to above, shocking levels of physical and sexual abuse. At the same time society has managed to make men feel increasing emasculated. One wonders if there might be a causal link between the two.

Many of us who have been involved in the problems of the Muslims here in the west have heard stories of educated western Muslim women being married off too often poorly educated cousins from "back home". The result is sometimes (of course not always) being very unfortunate, with these men physically abusing their wives. Of course, this is all far from the teachings of Islam on kindness and gentleness to one's wife, but the explanation that is often given is that this is the only way these men can seem to find to express their masculinity. Is this perhaps what is being played out on a wider scale in Western society as the the very natural and ultimatly biological roles for which men have been made are increasingly shown not to be their preserve at all as women confidently assert the ability to perform just as well if not better than men in many fields?

Although many of the aims and objectives of the femininst movement have noble and praiseworthy objectives as Muslims we cannot accept that the solution lies in this direction. Rather the real answers are in practicing Islam properly and fully, in letter and in spirit. Considering that the one thing most people in UK know abut Islam is that is oppresses women it seems paradoxically many Western women are finding the liberation they seek in submission to the will on the One true God, by following the religion of Islam. Islam seeks a balance and haromny in the male / female interaction, that demands sacrifice and contstraint by both for a noble and common cause and goal, rather than the confilict model that seems to often to dominate the discourse at this time.

Perhaps it is time to rethink why the message of Islam is so powerful for women in the world today and understand how Islam truly liberates women.